A quote taken from The Home Bureau Creed, by Ruby Green Smith

One of the first 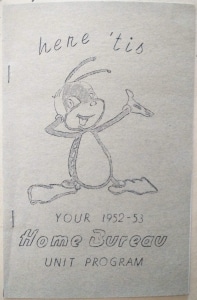 items I came across in the historian’s office was a delightful scrapbook titled, “History of Eagle Harbor Home Bureau, 1953.” Home Bureau was an organization for homemakers to learn skills that would improve their homes, and ultimately their communities. The scrapbook documents meetings held from the fall of 1952 to the spring of 1954. There are Cornell Extension Bulletins, sample projects, newspaper clippings, newsletters, and programs from various events. According to a newspaper clipping inside, each Home Bureau unit was encouraged to produce a “Historical Record Book” of their activities each year. Eagle Harbor was awarded third place for their record book. The two winning units’ books were sent to the District meeting of the Federation of Home Bureaus at Hornell. A historical book was produced for all of Orleans County, which according to the article was “so complete and perfect that it received special mention from the judges.”

While the Home Bureau Federation still exists in New York State, it had experienced a significant decline in Orleans County by the 1970’s. Home Bureau was closely tied to Cornell Extension. Until the mid-1950’s, a portion of the annual dues collected from each unit was sent to Cornell Extension. Individuals in a Home Bureau unit would learn a particular skill from a Home Demonstration Agent from Cornell, and then in turn would present that information at meetings that were held twice a month. Presentations generally focused on homemaking, but parenting and citizenship were addressed as well. Topics in 1953 included “Food for the Family Menu,” “Advanced Decorative Stitchery,” “Cupboard Arrangement,” “Cooperation in the Family,” and “Trends in Federal Government.”

Gaines had six Home Bureau units in 1953: West Gaines, Gaines, Childs, East Gaines, Eagle Harbor and Gaines Basin. The Eagle Harbor unit had eighteen members. Meetings and activities took place either at members’ homes, or at the Methodist church by the canal. Below is a photo of a Home Bureau hobby show held March 25, 1954 in the Methodist church dining room. It was noted that all families participated. 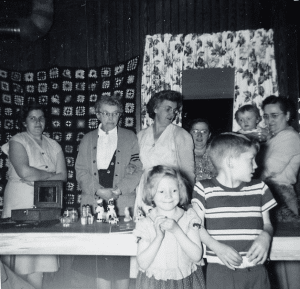 Because apple season will soon be here, and an article about Home Bureau would be more complete with a recipe, here is a dessert from a menu in the scrapbook for “Three Generations at One Table.”