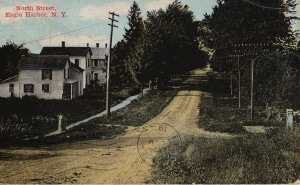 This postcard from around 1910 is a little bit misleading. In it, Eagle Harbor appears to be a quiet, shady little hamlet. In fact, Eagle Harbor was a busy place at this point in time. This photo was probably taken from the canal bridge, and looks north on what is now called Eagle Harbor Waterport Rd. There are a number of businesses and community organizations that this postcard fails to show.

To the west, on Eagle Harbor-Knowlesville Rd., there was the post office, and general store owned by the Bennett Bros., which still stands next to the bridge right on the canal. Farther west, was the Methodist Episcopal Church. To the east, on a little lane next to the canal was a grocery run by the Walters Bros. That building was demolished in 1913 when the canal was widened. The trees shown here hide the schoolhouse on the east side of the road. South of the canal was the Wesleyan Methodist Church, which burned in 1918, and also the cooperage, which was quite a large building.

It’s easy to imagine a warm spring day there — the voices of children walking home from the school for lunch, the sounds of hammering from the cooper shop, and the rattle of horse and wagon over the bridge. In 1910, Eagle Harbor was hardly quiet.