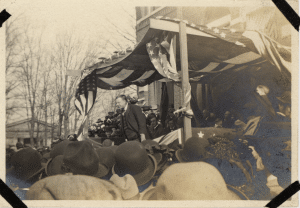 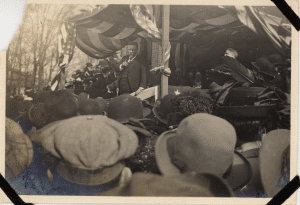 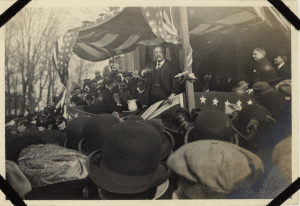 These photographs of Teddy Roosevelt were discovered in the course of filing materials in the historian’s office at Gaines Town Hall. No information is recorded on the backs of them. Accompanying notes indicate they were donated by Dan Hatch. Although Theodore Roosevelt never spoke in our township, folks from Gaines made sure to see him speak in Albion, which he did on three separate occasions. He spoke there on Oct. 26, 1898, Oct. 31, 1900, and Nov. 1, 1910. The question is, on which occasion were these photos taken? This is where history starts to look like detective work.

These snapshots were most likely taken with a Kodak Brownie camera. The Brownie was the first mass marketed camera for the general public, and was introduced in February 1900. Therefore, these photos were not taken of Roosevelt as candidate for New York State governor in 1898. Any photographs of that speech would have been taken by a professional photographer. These photos are either of Roosevelt as governor, or as former president. The photographs produced by the first Brownie camera were about 2″x2″. In 1901, the No. 2 Brownie was released, which produced snapshots about 2″x3″. Since the above photos are elongated and not square, they were probably taken during Roosevelt’s 1910 visit.

Roosevelt spoke from a platform constructed in front of the County Clerk’s Office. The top photo shows more of this building than the others. It also clearly shows the gable of what is now the Presbyterian church’s dining room in the background. All of the photos show people gathered on the northern steps of the Clerk’s Office.

Since the bottom third of these images show a sea of hats, it seems the photographer must have held his camera over his head to take pictures, hoping he would get some good shots. It also appears he jockeyed himself among the crowd in order to get closer, as can be gaged by the proximity to the platform and changing position of the hats in the foreground. It is also interesting to note the presence of feathered hats — even though women could not vote, they were there as well.

Subscribers to the Orleans American learned of Roosevelt’s visit the week before with the following front page ad. 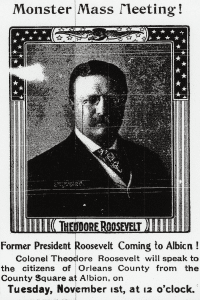 Roosevelt was campaigning for the Republican gubernatorial candidate, Henry Stimson. The Orleans American clearly supported the Republican cause. In the Nov. 3, 1910 edition, the headline reported that Col. Roosevelt was “Enthusiastically Received By the Thousands — Splendid and Telling Speeches.” Two lengthy articles described his visit and work for the Republican party in New York. Counter-intuitively, the Orleans Republican rejoiced over the Democrat victory of John Dix as governor. In the Nov. 2, 1910 edition, buried in the middle of the paper, they described Roosevelt’s visit in three sentences, concluding with, “Col. Roosevelt gave one of his characteristic talks.”