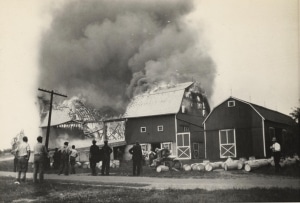 A photo of Densmore’s first barn fire, around 1929.

I am grateful to the assistance of John Long in sharing

his memories of Bill Densmore and the ’44 fire.

A. Willard “Bill” Densmore (1890-1964) loved farming. Despite suffering the misfortune of two barn fires in less than twenty years, he rebuilt each time because he couldn’t imagine doing anything else. Around 1929, during his tenure as Gaines Supervisor (1924-1931), his barn on Densmore Rd. burned to the foundation. So he built a new one on the old foundation. When that barn burned on Sept. 6, 1944, Densmore was in his early 50’s. He built another barn anyway. In the end, it was a heart attack in 1959, not fire, that forced Bill Densmore to quit farming. As he watched the tools of his trade being auctioned, he remarked to a neighbor, “I never thought it would come to this.”

According to the Orleans Republican, the total loss of the 1944 fire was estimated to be about $15,000, the equivalent of $214,000 in 2019. He lost a truck and its load of peaches, which must have been particularly discouraging. It had been a bad year for peaches, and Densmore was one of the few farmers in the area who had much of a crop. The newspaper stated that he also lost “several hundred bushels of wheat, which was to be sown soon.” John Long clarifies this report, explaining that Densmore would have intended to sell most of it, keeping only a little for himself. A great deal of hay also went up in flames. Unlike the first fire, there were no animals to worry about. At this point in time, Densmore had all his livestock at another farm on Transit Road.

Rebuilding in 1944 was perhaps more challenging than before because World War II made resources scarce. Farmers in his situation couldn’t always find enough new lumber, and sometimes had to look for used beams. Having a truck was crucial, because that was how farmers got their produce to the processors, and money in their pockets. Although production of consumer vehicles had stopped because of the war, Densmore applied to the county War Rationing Board and became the owner of the newest truck around. Mr. Long remembers it as a green GMC with a black painted grill, probably made for the military.

Bill Densmore’s third barn has fared better than the previous two. It’s a handsome white building that can still be seen on the east side of the road, sitting on the same foundation as the original. It stands as a quiet testament to one man’s perseverance and love of farming.