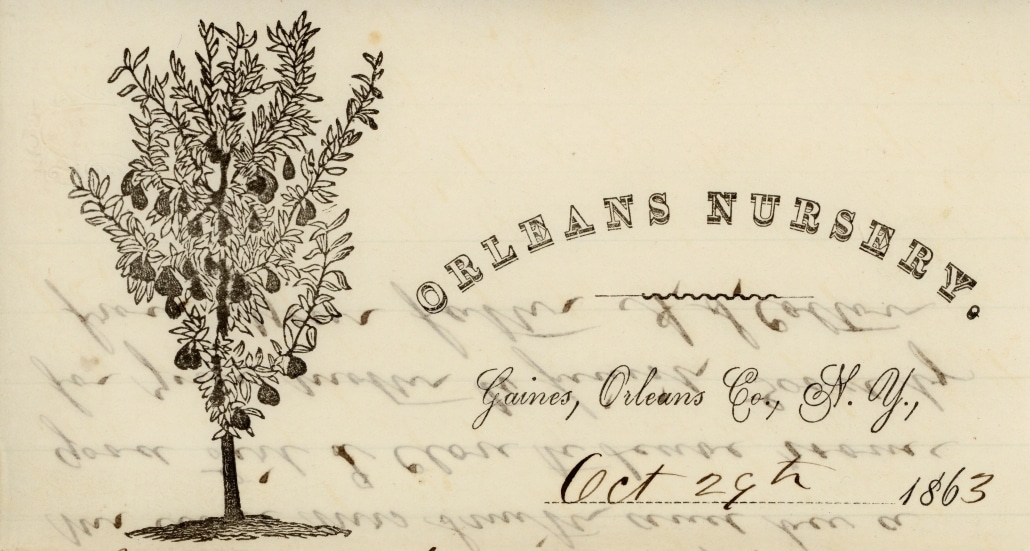 It is somewhat unusual in local history to have first hand accounts of everyday life from 150 years ago. Folks generally wrote brief diary entries, oftentimes citing “fair weather” and little else. Any letters we have tend to have been written from someone outside the immediate vicinity and addressed to a local person. This past year, the town was gifted with a small pack of letters written by the family of Alpheus S. Colton to his teenage daughter Anna in 1863. They are a glimpse into a moment in time in the daily life of Gaines.

Alpheus Colton lived on Gaines Basin Rd., about half a mile south of Ridge Rd. Alpheus was born in Longmeadow, Massachusetts, but married Emeline Calkins here in Gaines in 1847. Shortly thereafter, he and one of the Hutchinsons in town were business partners for the Orleans Nursery. By the 1860’s, Alpheus was the sole owner. While the nursery itself was just to the north of his home, there was an office in the village of Gaines. According to the 1865 census, the household consisted of Alpheus, Emeline his wife, her sister Eliza Calkins, and the Colton children – Anna (17), Laura (9), and Robbie (4). In the fall of 1863, Anna went on a prolonged visit to a distant cousin who was a jeweler in Newark, NJ. The pack of letters contain several written by her mother and father, and a charming one written in all capitals from Laura. This article focuses on a few lines in a letter written by Emeline dated October 29, 1863.

“There was a surprise visit to Mr. Wilder’s last evening. Your Mother & Father went, had a very very pleasant time. All took Something. [S]ome potatoes, corn, flour, butter, eggs, pickles, meat…cake, sugar, tea, preserves, canned fruit…Servise [sic] will be held in our church next Sabbath…” Despite sounding fairly mundane, there is quite a bit of history to unpack in these few sentences.

The Mr. Wilder the Coltons visited was Rev. Moses Wilder, who was given the happy yet unenviable task of reuniting the Congregationalist Church and the staunchly abolitionist Free Congregationalist Church which had split from them sixteen years earlier. In their articles of faith, they explicitly stated “we will not fellowship as Christians” with those who did not fully share their uncompromising positions on slavery. The Free Congregationalists had purchased and renovated the old meeting house about a half mile west on Ridge Road in 1848. With the Emancipation Proclamation having gone into effect Jan. 1, 1863, there was no longer much reason to maintain separate congregations. Church records indicate Mr. Wilder had a yearly contract, beginning October 1, 1863. His compensation was to be paid semi-annually, plus use of the parsonage next to the Congregational church.

Lacking any specific documentation, one can suppose Rev. Wilder moved here with his family in early October, and had had some time to meet with both churches. Emmeline’s long list of the food stuffs brought on a “surprise visit” sounds much like a house warming. She may have had reason to savor the event as “very, very pleasant.” Five years earlier, Emeline was a member of the Free Congregationalist church, and had submitted a letter of dismissal, which was necessary for her to join another church – apparently, the original Congregationalist church in Gaines. Her emphasis on how much she enjoyed this event may indicate it had been some time since she had been able to socialize “as a Christian” with members of her old church.

While meeting minutes were brief, it appears that Rev. Wilder ministered to each church separately until early in 1864, when he suggested it was time to reorganize as a new congregation. Perhaps services were alternately held at each church for a few months, which might explain Emeline’s comment about the upcoming Sabbath. Rev. Wilder did not live in Gaines long. By July of 1865, the church had decided it could not afford the $600 per year as stipulated in the contract. The minutes for the meeting in which this decision was made noted that the legal services of Arad Thomas, Esq., author of “The Pioneer History of Orleans County”, were secured for $25. By August, plans were being made to sell the “West Church,” the proceeds to be used to repair the church and parsonage, and to start charging pew rent to help pay for the minister. With a better handle on their finances, the next minister, Rev. M. H. Higley, had a contract for $800 per year.

Emeline Colton’s letter gives us additional insight into the aftermath of a highly visible setback for the Congregationalist Church, the split in 1847. Though his tenure was short, Rev. Wilder did succeed in merging the two congregations into one. In the years that followed, the church grew and for decades exerted significant influence in the village of Gaines.